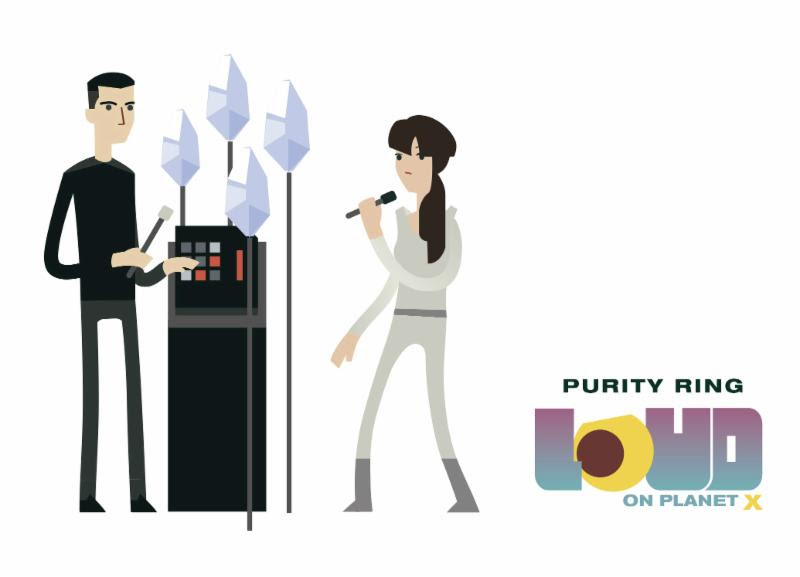 Toronto electro-pop duo Purity Ring have been added to the indie game Loud on Planet X.

The makers of the game, Pop Sandbox, have also offered up a free stream of Brendan Canning and Justin Peroff of Broken Social Scene’s secondary score for the game as well as a Kickstarter video explaining the project;

Supporters will have access to an exclusive limited edition 7″ single and artwork from indie comic artist Michael DeForge. Loud on Planet X is a tower defence game where you select an artist or band and use a variety of power-ups to defend your stage from a horde of alients.

Pop Sandbox is aiming for a fall 2015 release on PS4, PS Vita, Steam, iOS, and Android. Head here for the Kickstarter page for a video showing gameplay and members of the bands participating talking about the project, what video game character they would invite to be in their band and their favourite retro games.

Purity Ring will play Field Trip at Fort York in Toronto on June 6.

This entry was posted on Monday, June 1st, 2015 at 4:57 pm and tagged with Brendan Canning, Field Trip, Free streaming MP3, Just Peroff, Kickstarter, Loud on Planet X, Michael DeForge, Pop Sandbox, Purity Ring and posted in Music. You can follow any responses to this entry through the RSS 2.0 feed.
« Videos for a Lazy Sunday: Daybehavior’s ‘Change’
Stream Steve Angello’s ‘Children of the Wild’, featuring Mako, for Free »