Secret Boyfriend have shared a free stream of ‘Memorize Them Well’ from their forthcoming album Memory Care Unit, out in January 2016 on Blackest Ever Black, exact release date TBA.

The new album finds Secret Boyfriend, aka Ryan Martin eschewing the short songs of his previous outing, 2013’s This is Always Where You’ve Lived, in favour of vaster songs.

Berlin artist Felix K has announced that he will release his 12″ EP Tragedy of the Commons on Blackest Ever Black on February 16.

To preview the EP, he’s shared a free stream the tracks from the EP;

He’s been a part of the underground scene in Berlin since the 90’s, often incognito. Though his roots are in drum ‘n bass, he has made efforts to reinvigorate the genre by introducing elements of dub and techno. Felix and his colleagues do things their way, taking a DIY approach and remaining committed to short-run releases and remaining underground. 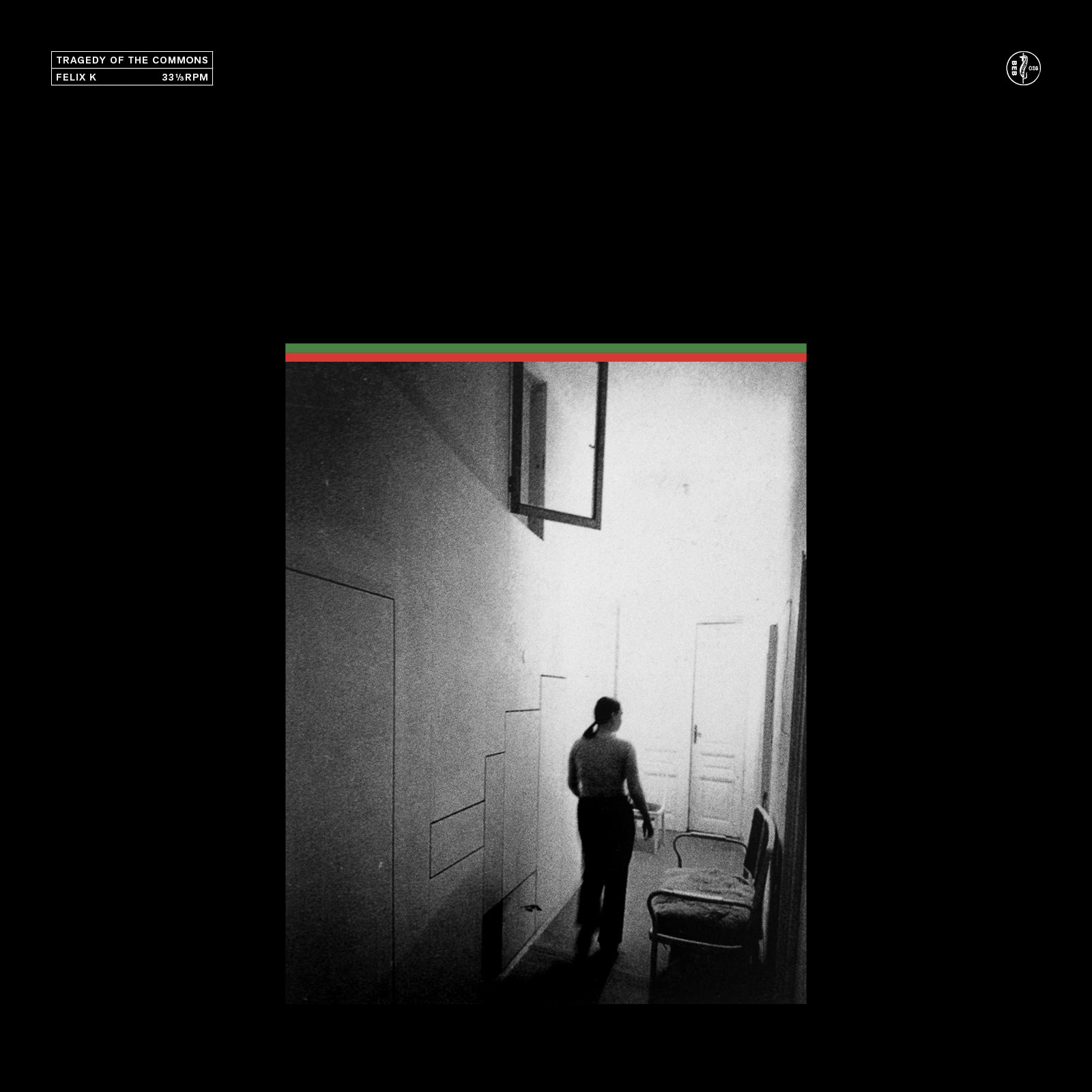 Tarcar have announced that they will release their limited edition Mince Glace EP via Blackest Ever Black on December 15.

To celebrate, they’ve shared a free stream of ‘Fireball’. 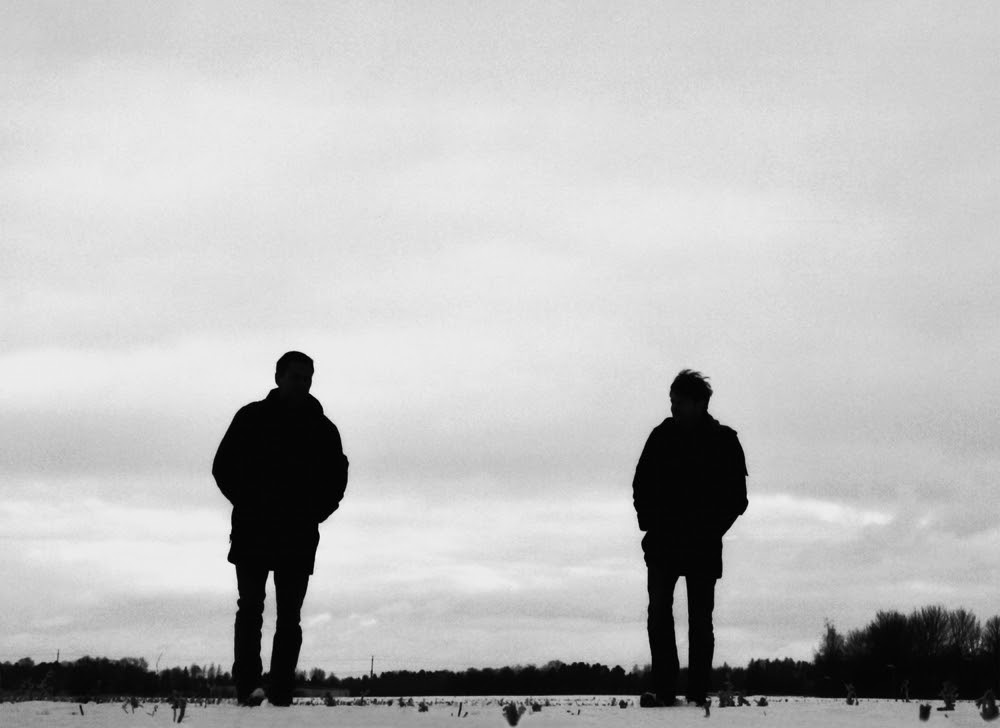 Image courtesy of Blackest Ever Black

Swedish space-rock duo Bremen have announced their fittingly-titled sophomore album Second Launch, out on June 9 on Blackest Ever Black.

To celebrate, they’ve shared a free stream of ‘Hollow Wave’;

It’s the follow-up to their 2013 debut and the 11 track effort finds the duo of Lanchy Orre and Jonas Tiljander embracing the dark side of kraut and progressive rock with early electronic and drone music added to the mix. It’s not dissimilar to the music created by Nico and John Cale on The Marble Index and Desertshore.

The music is a complex dialogue between Orre’s guitar and Tiljander’s organ that’s by turns pensive and combative. It’s all bound together by their love of reverb and feedback. While it’s the focal point of the album, it’s also supplemented by sparingly deployed synthesizers and drums. The duo aimed to recreate the vast emptiness of space and the complete obliteration of all meaning of self and identity in the face of such vastness. 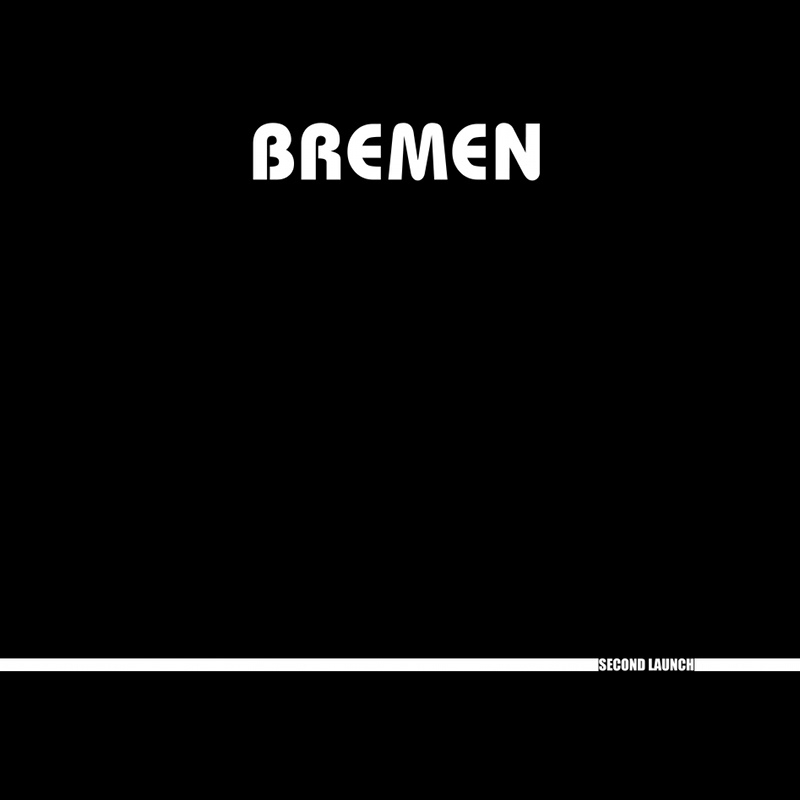 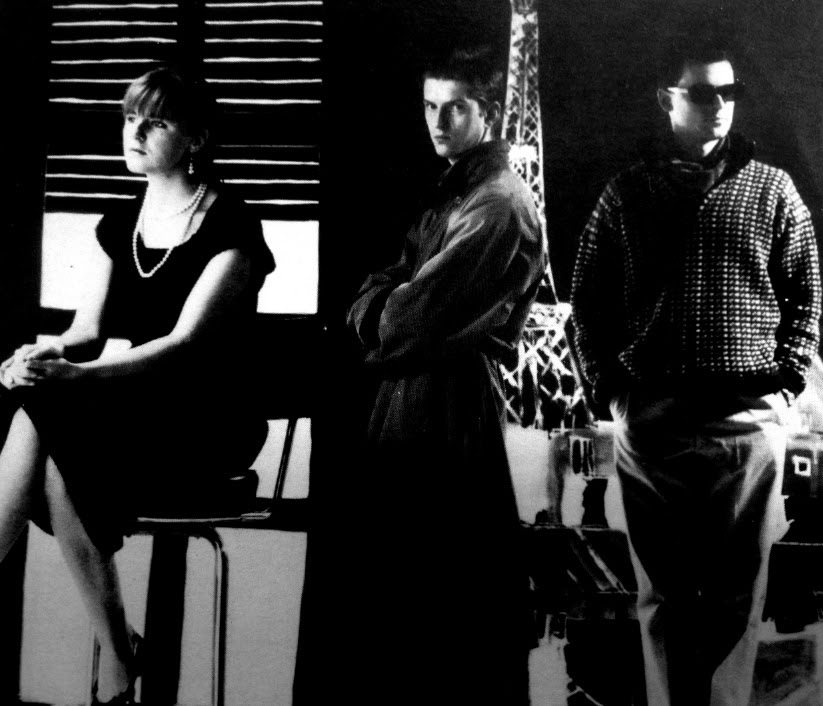 Images courtesy of Blackest Ever Black

Weekend have shared a free stream of ‘Nostalgia’ from their forthcoming The ’81 Demos, out on Blackest Ever Black on March 3.

Alice Stratton formed Weekend after Young Marble Giants called it a day in 1981. She began writing songs with Mark “Spike” Williams, one of the founders of Z Block Records and a member of the band Reptile Ranch. The trio was filled out by Simon Booth on guitar. They recorded four tracks which can be found on the 12″.

Stratton had this to say about The ’81 Demos in a statement;

“It’s a curious experience revisiting the ’81 demos, which now seem, in retrospect, naive and relatively unburdened musically, however the emotion contained within them is still penetrating through, after 32 years.

‘Drumbeat’ and ‘Red Planes’ began as simple bass lines and vocals I’d written, after the demise of Young Marble Giants, in a fresh and tentative get-together in Cardiff, with Spike, a musician friend, formally with Reptile Ranch and one of the Z Block Records originators. Layered narratives and the wish to portray their emotional content in sound (within my technical limitations) was the driving force for me, and Spike was the perfect partner for entering that atmospheric soundscape. ‘Drumbeat’’s melodic ups and downs tempered the track along its journey until, fittingly, entering the surreal at its end.

On ‘Red Planes’ the contrast of the solemn bass and vocal and Spike’s violin playing, soaring and diving and weaving through every possible mood with no inhibitions, created an almost psychedelic feel with a menacing undercurrent. This highlights the whole feel of freedom at the time, despite the apprehensiveness present in the music.

When I first heard ‘Nostalgia’ I was deeply moved by the bittersweet lyrics and depiction of the human resolve that is needed to survive our emotional experiences. One of the joys of working with Spike was his ability to take the soul on an intense journey just about anywhere when he played violin.

Just as Spike and I began exploring these songs I was contacted by Simon with a view to a possible collaboration. I met up with him at Mole Jazz record shop where he was working. He was full of enthusiasm and vibrantly shared his love of so many jazz greats, firing an interest that has stayed with me to this day.

I was inspired by his positivity but didn’t want to abandon the union with Spike and very soon after, I moved to London, into a squat in Camden, where Weekend was born and the ’81 demos were re-recorded with Simon and Spike.

‘Summerdays’ instrumental was practically squeezed out of the tube as it went on to tape and is now instantly recognisable as a different strand sound-wise.

Simon was skilful at visioning and pulling together a whole team of outstanding jazz and world musicians (Larry Stabbins, Dawson Miller, Roy Dodds and the late Harry Beckett and Simon Jeffes) who along with Spike, all contributed their tremendous skills with great zest and creativity, as well as Robin Millar, who was the magic ingredient that smoothly wove everything together, in the studio, when recording La Varieté. It was an honour to work with them all, and was somewhat of a magical mystery tour and an introduction to one of many lessons in life: to expect the unexpected.” 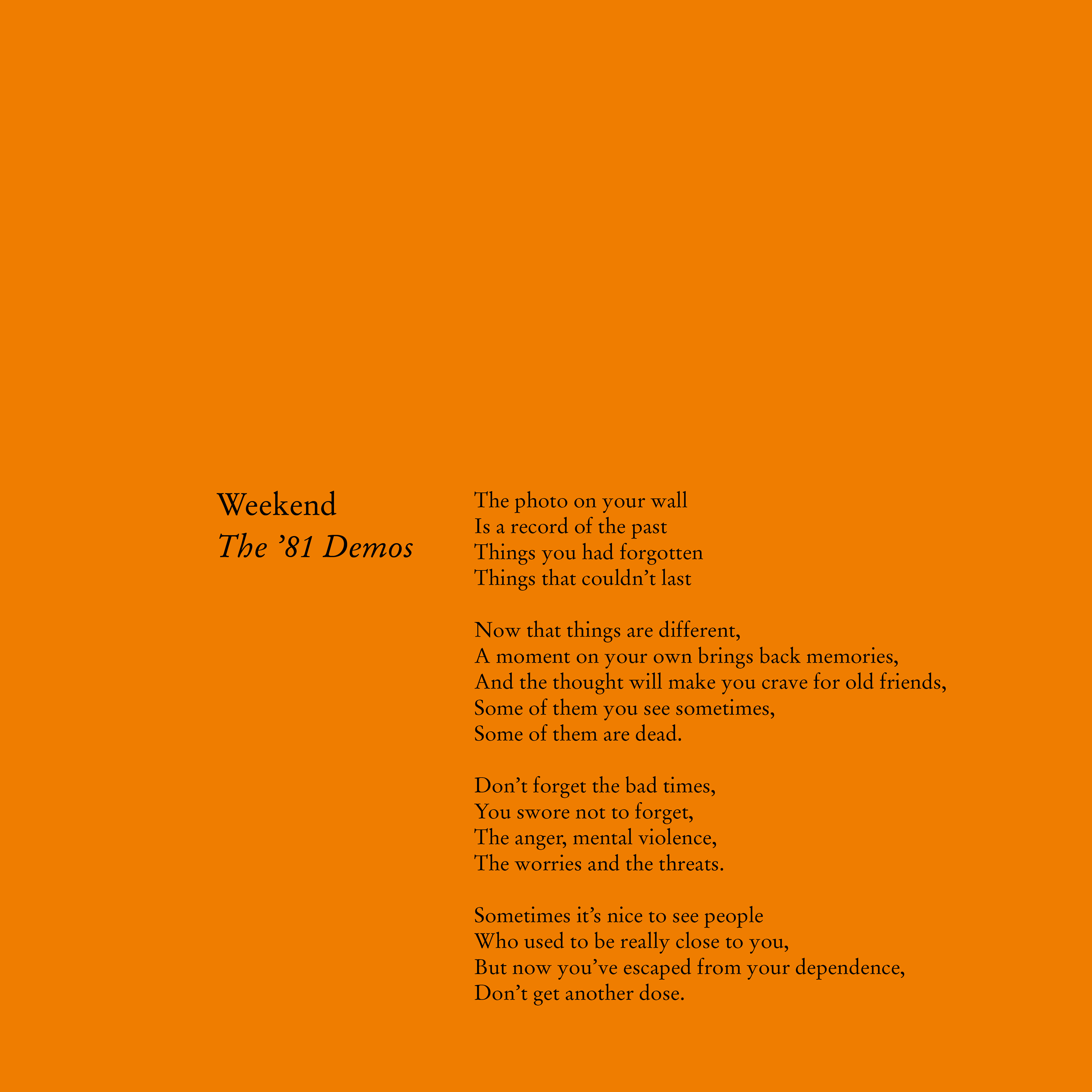 A1. Drumbeat
A2. Red Planes
B1. Nostalgia
B2. Summerdays Instrumental

Stream Secret Boyfriend’s ‘Beyond The Darkness’ For Free 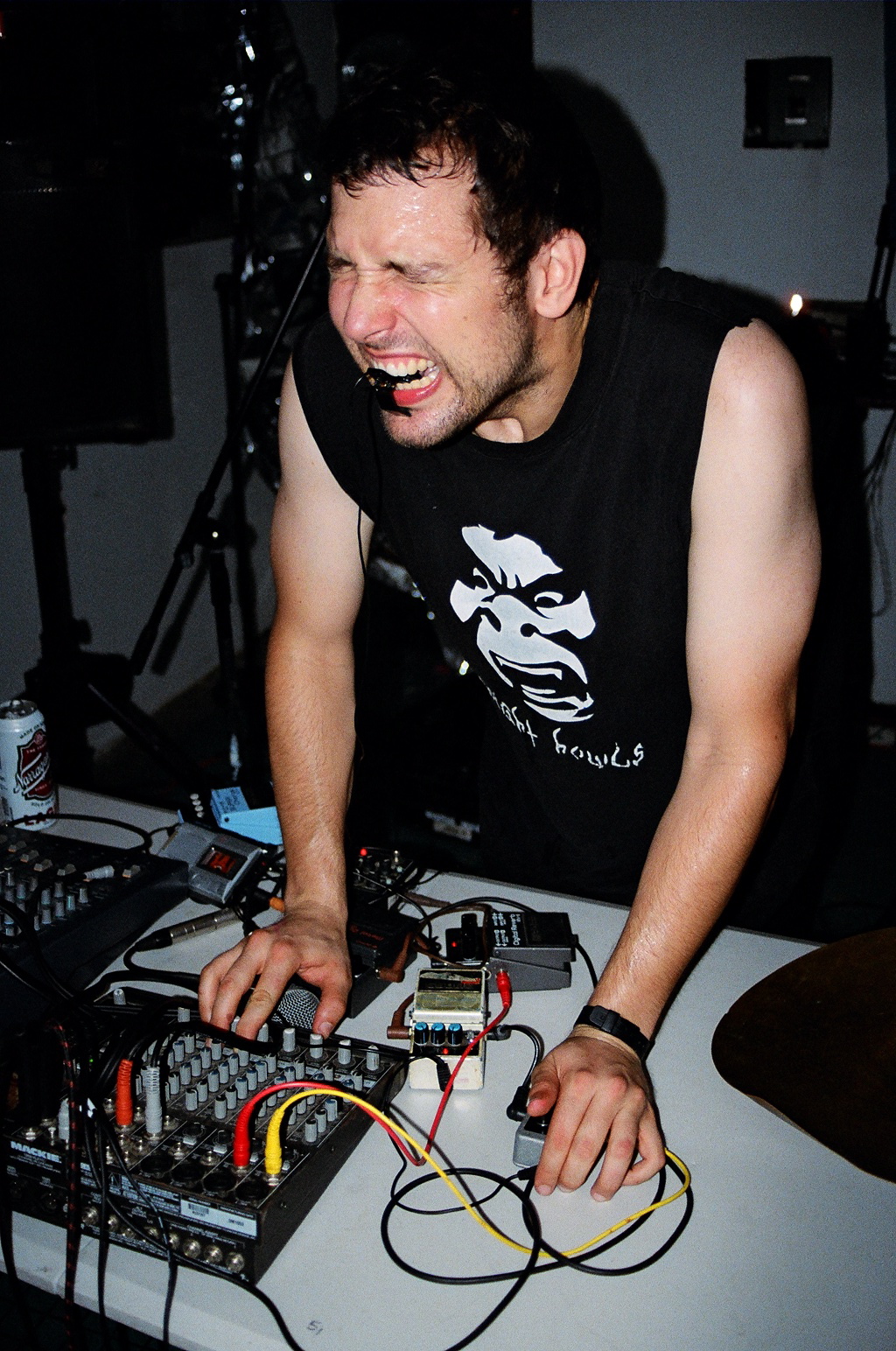 Secret Boyfriend, aka Ryan Martin of Boyzone (Not the Irish boy band), will release his debut album on This Is Always Where You Lived on December 9 via Blackest Ever Black.

To celebrate, he’s shared a free stream of the track ‘Beyond the Darkness’. 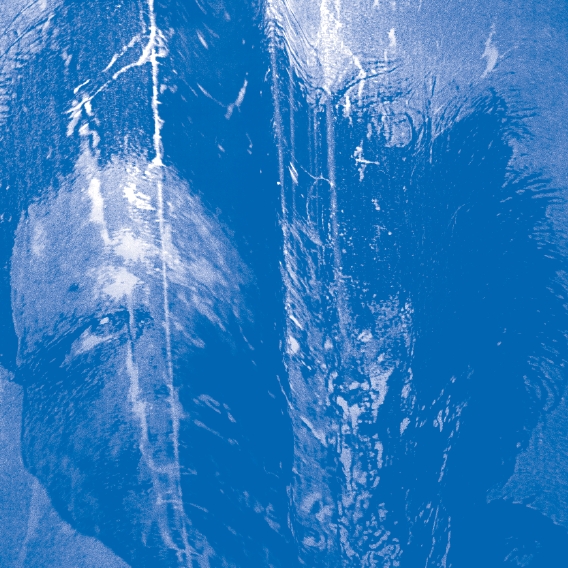 A1. Summer Wheels / Mysterious Fires
A2. Silvering The Wing
A3. Form Me
A4. Flashback
A5. Remarkable Fluids
A6. Beyond The Darkness
B1. Dream Scrape
B2. Glint And Follow You
B3. Have You Heard About This House?
B4. Last Town
B5. Deleted Hill
B6. This Is Always Where You’ve Lived

Leave a comment   |  tags: 'Beyond The Darkness', Album cover artwork, Blackest Ever Black, Free streaming MP3, Secret Boyfriend, This Is Always Where You Lived, Tracklisting | posted in Music

Videos For a Lazy Sunday: Barnett + Coloccia’s ‘So How Much Do You Know About Me?’

Considering that Faith Coloccia and Alex Barnet are separated by 2000 miles, the title of the first single from their forthcoming EP Retrieval is fitting; ‘So How Much Do You Know About Me?’

Barnett + Coloccia‘s Retrieval is out on December 2 on Blackest Ever Black.

Despite the distance, the pair did meet in person, recording the bulk of the seven tracks over the course of three days at Otic Sound in Vancouver using a combination of Coloccia’s treated vocals,  tape-manipulated acoustic recordings and AM radio sounds with Barnet adding synths to create additional loops, beats and rhythmic elements. They got together again for the final mixing and editing session at AVAST! Studio in Seattle with engineer/producer Randall Dunn.

The result is a collection of songs that’s introspective in nature but cosmic in scope. 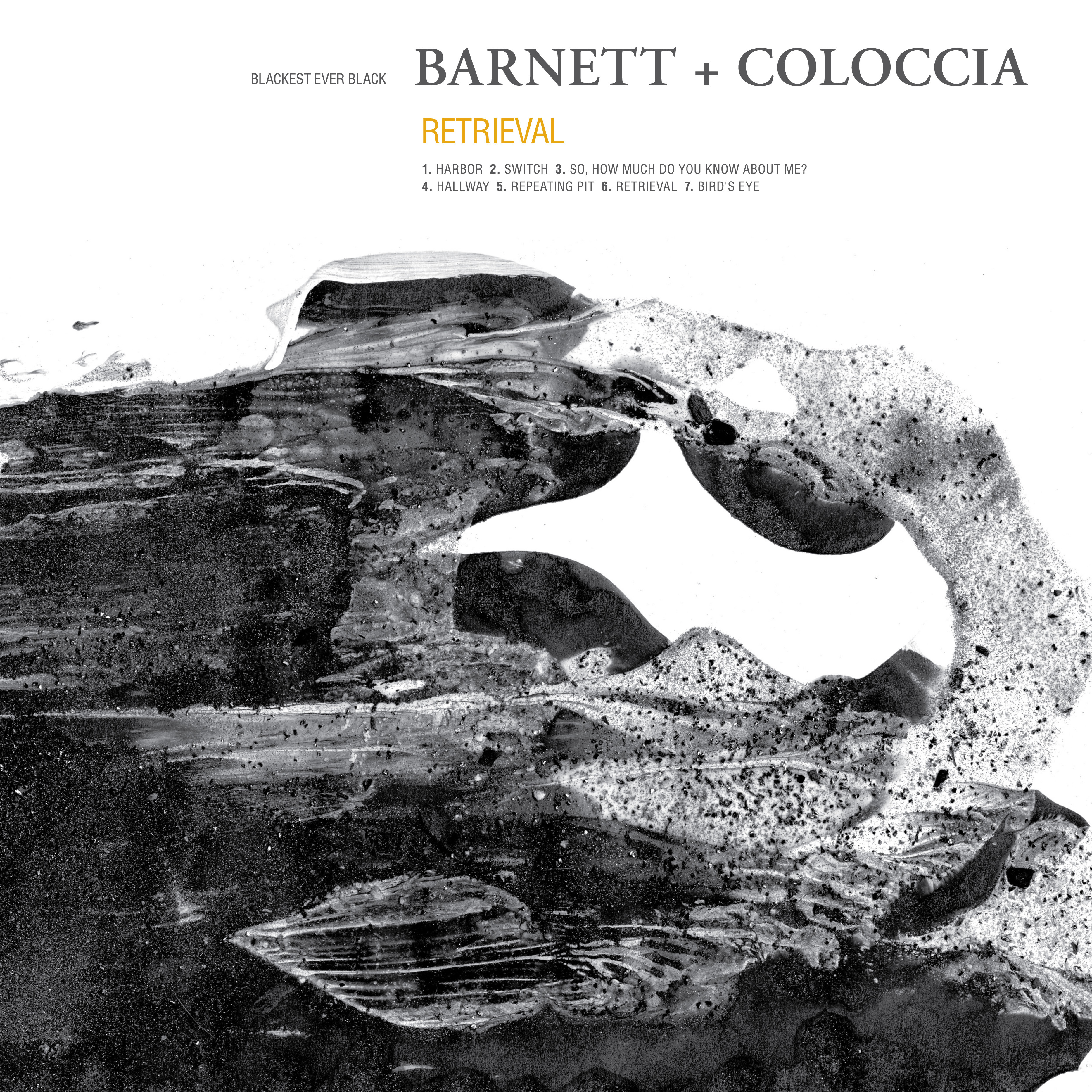 Leave a comment   |  tags: 'So How Muci Do You Know About Me?', Album artwork, AVAST! Studio, Barnett + Coloccia, Blackest Ever Black, Otic Sound, Randall Dunn, Retrieval, Tracklisting | posted in Music 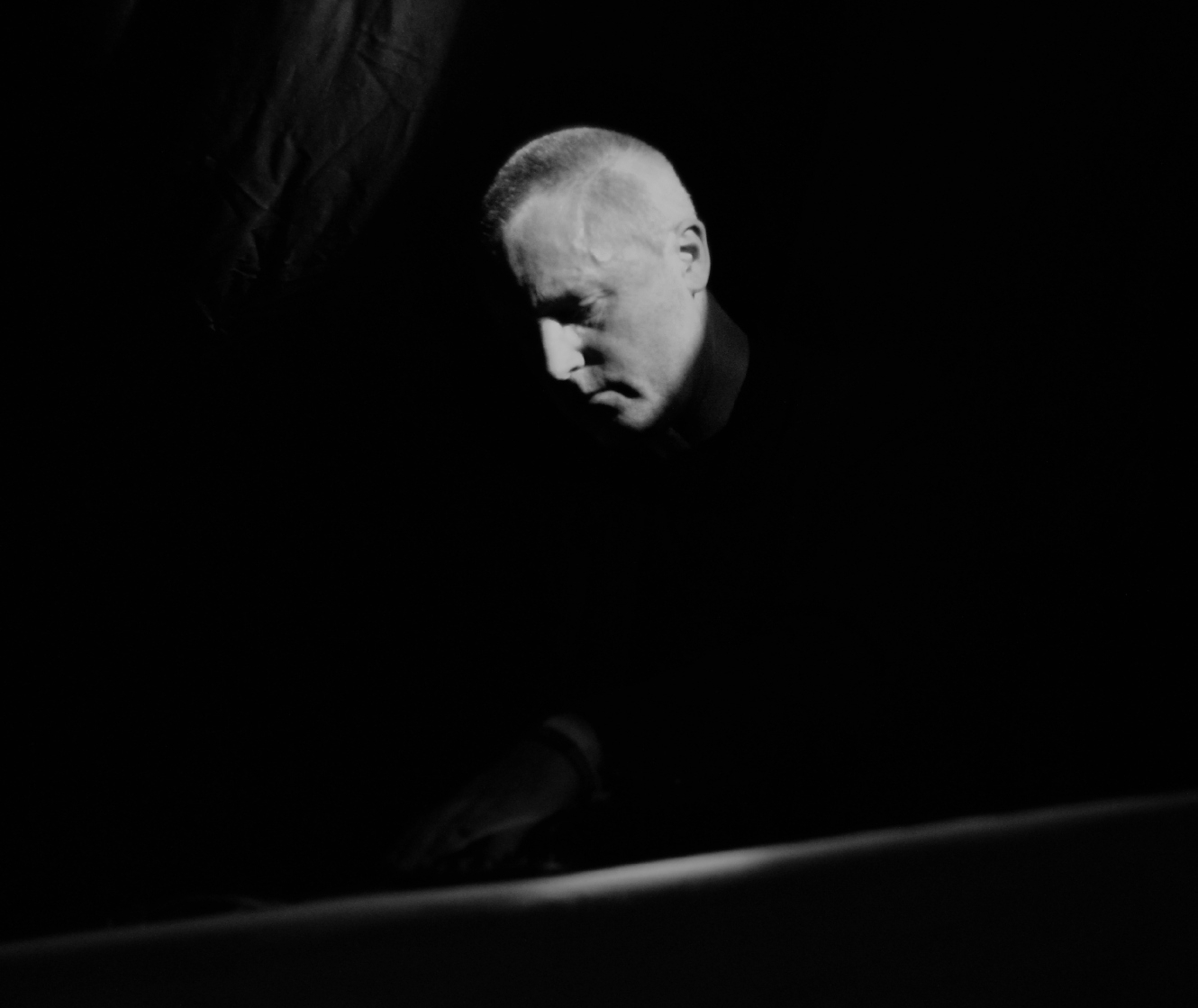 Image courtesy of Blackest Ever Black

Cut Hands, aka William Bennett has announced that he will released his new 12″ Damballah via Blackest Ever Black on November 11.

To celebrate, Bennet has shared a free stream/download of the title track. 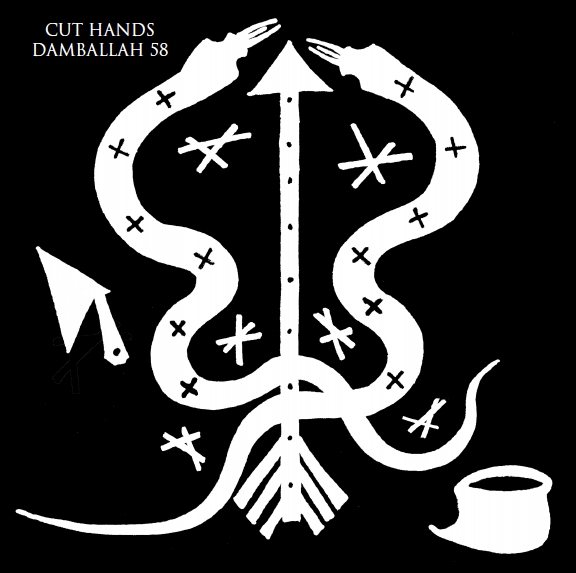 A1. Damballah 58
B1. Mamba Muntu
B2. Belladonna Theme
B3. Immersion

Videos For a Lazy Sunday: Tropic of Cancer’s ‘Plant Lilies At My Head’

The Pedro Maia-directed video for Tropic of Cancer‘s ‘Plant Lilies At My Head’ was created from the material and light manipulation of super 8 film as well as being based on shootings Maia made with ToC’s Camella Lobo inspired by the cover artwork of Tropic of Cancer’s latest release Restless Idylls, out now on Blackest Ever Black.

Tropic of Cancer is also currently on tour in Europe. 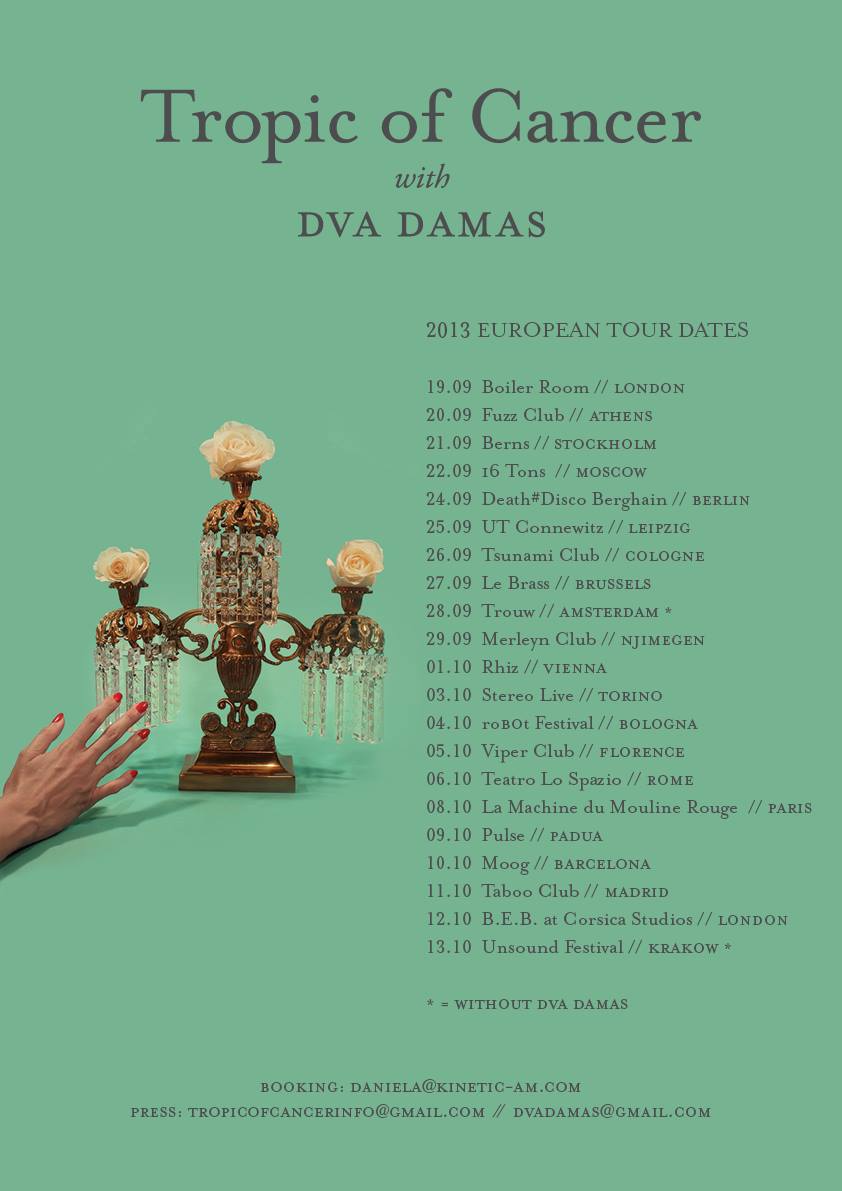 Tropic of Cancer, aka Camella Lobo, has announced that she will release her debut album Restless Idylls via Blackest Ever Black on September 23.

She is also sharing a free stream of the 7″ version of the track ‘More Alone’.

The album was produced by Karl O’Connor in New York and London. It’s Lobo’s first release for Blackest Ever Black since 2011’s The Sorrow of Two Blooms EP, which will be re-released in August ahead of the album’s release. This is her first release following a series of vinyl singles. Restless Idylls will be available on double gate fold vinyl and digitally.

Album artwork, tracklisting and tour dates are below;